Gastric Banding surgery or bariatric surgery is a weight-loss surgical treatment for people suffering from obesity.

During this surgery, the doctors place a silicone band around the upper part of your stomach, it helps to constrict or decrease the size of your stomach so that the patient will not be able to do overeating and feel full after consuming less amount of food. The Food and Drug Administration (FDA) has approved stomach band Dubai as a weight loss treatment for obese people. 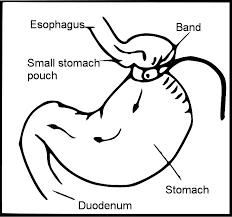 Under this surgery, the surgeon will place a silicone band around your upper part of the stomach and a tube is attached to the band inserted through a port under the skin of the abdomen. In order to inflate the silicon band, the doctor injects a saline solution using the port. The placing of the band around the stomach results in creating a small pouch on the upper portion of the stomach to carry a small amount of food. Due to this, the patient will feel very full after eating a small amount of food and therefore, reducing over-eating. The surgery is performed using a laparoscope, where the surgeon makes 4 to 6 small surgical cuts in your belly to insert a tiny camera and see the insides of your stomach. The patient is given general anesthesia, a medicine to make the patient asleep and comfortable during the surgery.

After the surgery gets completed, your doctor will provide a list of food and supplements to be taken during your recovery period. Just after the surgery, you will be required to have only water and fluids such as soup because your stomach will start healing at that time. Then, after a few weeks, you will be allowed to have pureed vegetables and blended food such as yogurt. After 4 to 6 weeks, you can have soft food and thereafter switch to a normal diet after the 6 th week of time.

However, everyone cannot have gastric bypass surgery. It requires a body mass index ( BMI ) of about 35 or above. If people are suffering from other obesity-related problems including diabetes, hypertension or sleep apnea can have gastric banding surgery. However, surgical treatment is not recommended for people who are suffering from drug or alcohol abuse disorder and psychiatric illness.

long-term weight loss: Through gastric banding surgery, you can have a quick weight loss of about 40 to 60 kg.

quick recovery: Unlike other surgeries, which take a lot of time to heal your wounds, stomach band UAE results in quick recovery.

Moreover, with the gastric banding surgery, the patients are in an advantaged situation as they can have their band removed or adjusted whenever they want. The band can either be tightened or loosened depending upon the need of the patient. Through this surgery, excess weight of up to 40 to 60 percent can be lost.

However, there are also some risks associated with stomach band Dubai. These include:

Why Should we have it?

According to the guidelines of the government, gastric band replacement is only for the person having a body mass index (BMI) of 35 or above it. The patient of BMI of 30-34.9 can opt for this surgery if they are suffering from Obesity-related health issue for example diabetes, hypertension, sleep apnea, etc.

With the development and advancement of surgical techniques, the outcome of the surgery is becoming more positive. Now the risk factor is continuously decreasing in the surgical operation. The success rate of the stomach band UAE is very high.

One of the best Stomach band surgery place, where you can go for this surgery is in Dubai. Dr. Muharrem Oner is one famous doctor who had done 2500+ surgery.