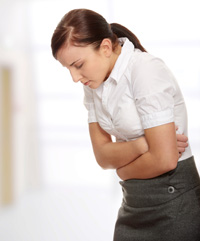 "Severe abdominal pain can sometimes warrant an urgent admission to hospital, so that the cause of the pain can be diagnosed and urgent treatment performed to stop progression of the condition.

Many causes of abdominal pain can be diagnosed and treated with laparoscopic surgery. This type of surgery leads to a shorter recovery and a faster return to normal activities, compared to traditional open operations."

Abdominal pain can be caused by either;

Each of these types of pain will lead to specific symptoms. 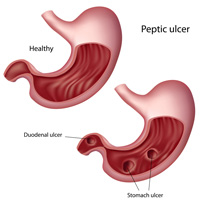 Organs within the abdomen are lined by an internal skin layer called the peritoneum. When an organ is inflamed the peritoneum also becomes inflamed. This causes intense localised pain where the organ is situated. The pain is worse when a person tries to move around, change position, cough, sneeze or walk. The location of the pain will give a clue as to which organ is inflamed;

If the inflammation is in the upper abdomen, it may be due an ulcer or gastritis.

If it is in the upper abdomen and radiating to the back, it could be due to pancreatitis. This is usually associated with vomiting and can be caused by gallstones or alcohol.

Right upper abdominal pain can be caused by an inflamed gallbladder. 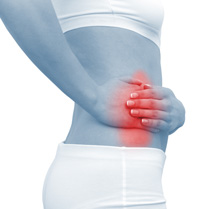 Pain in the right lower abdomen could be due to either to the development of an appendicitis or a condition which mimics it called mesenteric adenitis. This is common in children and can be associated with a sore throat.

If the pain is in the left lower part of the abdomen, it is commonly due to diverticulitis, a condition affecting older adults.

Pain in the lower part of the abdomen in the midline can be due to infection in the bladder, the ovarian tubes or due to problems with the ovary such as a cyst or torsion.

Colic describes the type of pain that is experienced if one of the muscular tubes in the abdomen becomes blocked. The pain is very typical and is due to the muscular lining of the ‘tube’ trying to unblock itself with strong exaggerated muscular contractions that cause pain. The pain therefore will come and go in crescendos, or waves, with periods of very intense pain followed by periods when the pain is less severe.

The common causes for these blockages are;

A kidney stone blocking the ureter (muscular tube connecting the kidney to the bladder). Renal colic causes very severe pain from the upper back radiating down around the abdomen into the groin.  This pain is excruciating and very sharp. It comes and goes in crescendos. The pain will continue until the stone has passed and this can sometimes be several days.

Gallstones (causing blockage of the gallbladder), The pain of gallstones will typically occur after an oily or fatty meal and causes upper abdominal colicky pain associated with nausea. It can last 30 minutes to 2 or 3 hours.

Period pain. Occasionally sever period pain can be confused with other types of colicy pain particularly in young adults.

When a hollow organ such as the stomach, bowel or appendix ruptures, the contents of the organ spill throughout the abdominal cavity and cause an immediate inflammation in the peritoneal lining of the abdomen. This is called generalised peritonitis as it affects the whole of the abdominal compartment.

A patient with generalised peritonitis will have severe pain throughout the abdomen that will be worse on any type of movement, coughing or even speaking. A patient will generally be confined to bed and look very uncomfortable. They will have an associated high pulse rate, will be breathing shallowly, may look pale and may have a clammy forehead.